Why 3D Imaging is Changing the Game for Implant Treatment Planning

This entry was posted on November 2021 by Chris Bobby. 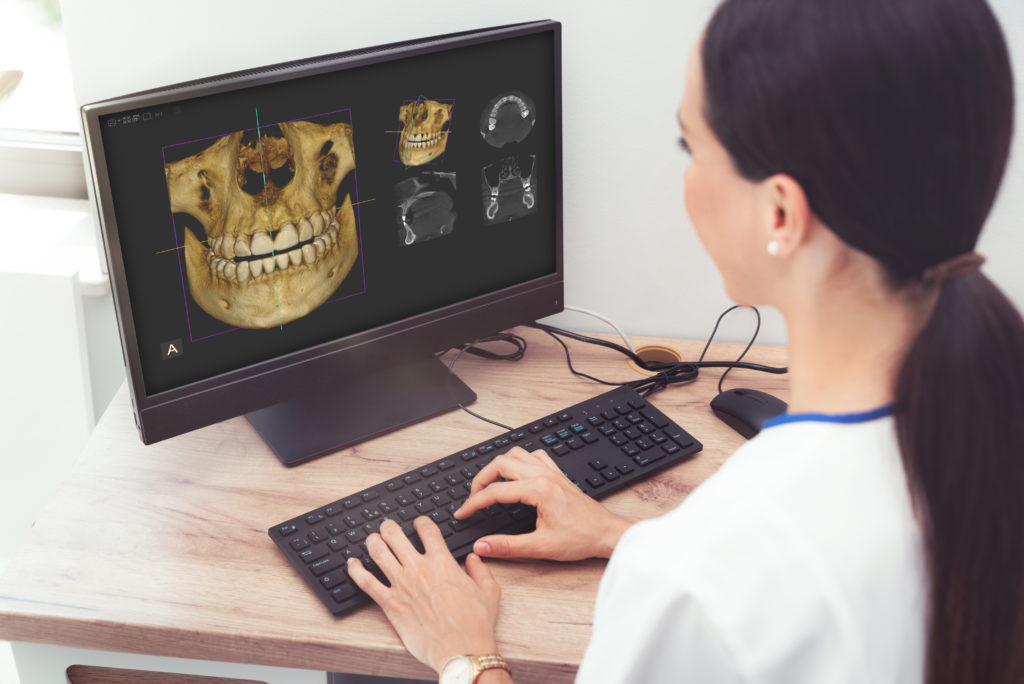 Practices increasingly rely on cone beam computed tomography for implant imaging and treatment planning. Pre-implant imaging helps to improve diagnoses. It allows for optimal implant selection, prevents surgical surprises and can serve as a basis for guided surgery. It is also incredibly important for legal documentation.

“We live in an increasingly litigious society, and as practitioners, it’s wise to take steps to demonstrate that you did the proper planning for patients,” said Dr. Heidi Kohltfarber, oral and maxillofacial radiologist and founder of Dental Radiology Diagnostics. “If anything were to go wrong with the implant placement, having CBCT imaging to show that you planned accordingly based on the patient’s anatomy is crucial.”

Part of planning starts with reviewing existing radiographs in comparison to CBCT images to determine if anything has changed in size over time or if there are any anatomical changes. CBCT images should be evaluated in their entirety, using a systematic search pattern, including the following elements: Start with a global perspective, using axial and coronal sections, down to a local perspective, using sagittal sections. Also, compare the left and right sides, keeping an eye out for areas with a lack of symmetry. Asymmetry can be an anatomic variance but that is not always the case. If something abnormal is found in the scans, it should be documented using traditional radiographic signs.

Areas to be reviewed include the following:

Evaluating the maxillary is very important, especially prior to performing sinus lifts and bone graphs. Neurovascular canals are more visible in CBCT than they are in 2D, and these should be avoided whenever possible. There have been cases where small incisal-type branches in the maxilla or mandible caused numbness when impinged upon. This can also lead to bleeding and impact the ability to visualize the surgical area. When evaluating a sinus for sinus augmentation, measure the distance of the canals from the inferior aspect of the floor so you can try to avoid it.

Evaluating sinuses is crucial, especially if considering a sinus lift and bone graft. First, check to see if there is sinus septation, as this could cause issues with a sinus lift. Also, if there is a mucosal thickening within the sinuses, check out the teeth and refer this to an ear, nose and throat doctor before proceeding. This allows the ENT to clean out the sinuses to prepare a clean surgical site.

In analyzing the sinuses, CBCT imaging can help differentiate between acute and chronic rhinosinusitis. Acute sinusitis will have a bubbly appearance, which is indicative of active secretions. If the cortical borders are thin and intact, this is likely acute rhinosinusitis. Typically, this does not require an ENT referral unless the patient has had persistent sinus symptoms for two weeks or more, or if a sinus lift and bone graft are planned on that side. With chronic sinusitis, there is thickening and sclerosis of the cortical borders, and sometimes there are differences between the right and left side, due to inflammation. Such cases should be referred to an ENT.

Check the CBCT images to make sure the patient has a straight nasal septum. Many people have a deviated nasal septum, which can decrease the airflow on that particular side. Also, look at the nasal turbinates and the lacrimal ducts. Sometimes there are variations in the size of turbinates, which is normal, but worth examining as part of a comprehensive exam.

When evaluating the sphenoid bone, check from side to side to ensure the cortical border is intact, since some pathologies show up in this particular area. Mastoid air cells are not always symmetrical, and this isn’t a concern. Pneumatization can occur anywhere throughout the temporal bone, and it’s not uncommon to see in the zygomatic process as well.

When evaluating a CBCT, the differences between a styloid process and a calcified carotid atheroma should be clear. A styloid process tends to be very high in the neck (approximately at C1 or C2 level) while a calcified carotid atheroma will be at C3 or C4 level. Stylohyoid ligaments can also ossify, which is common in roughly 4% of the population. Of the 4% of the population that have ossified stylohyoid ligaments, only 4-10% of them actually have eagle syndrome, which is caused by compression of the carotid artery. If the patient is asymptomatic, that is normal. If the patient is experiencing issues such as fainting or pain if they turn their neck, that is more likely to be an actual anatomical impingement.

Verify that there isn’t thickening or sclerosis in this area, which would be indicative of a chronic inflammatory process. The temporomandibular joint region should have thin cortical borders within the glenoid fossa region (the borders are not fully ossified until an individual is 21 to 22 years old, so if you’re evaluating an 18-year-old patient and don’t see cortical borders, it doesn’t mean they aren’t there).

It’s not uncommon to see beam hardening artifacts in the ascending ramus region. However, generally these areas should be symmetrical. Ensure that cortical borders are smooth and intact. If not, this could be the sign of a pathological entity.

When analyzing the mandibular canal, check the cortical borders so you can avoid placing implants within these. Keep in mind that in roughly 5% of the population, osteoporotic changes make it difficult to see cortical borders. In such cases, working with a specialist such as an oral maxillofacial radiologist can be beneficial for determining next steps.

Prior to implant procedures, examine the available bone height and width. Look at the mandibular canal in relation to this, and leave at least a 1- to 2-millimeter buffer in between. That imagery will help determine the type of fixture, its length and diameter and the access of orientation.

CBCT imaging will also help make it clear the quality of the bone prior to implant surgery to verify if the patient is a good candidate for the procedure. Generalized pitting with thin borders may indicate osteoporotic changes. This may mean there is poor quality bone in that area.

All of this analysis will help ensure implant procedures move forward seamlessly and successfully. It’s equally important to document the analysis that was done in the patient’s electronic record. This is necessary from a medical and legal perspective. This due diligence helps to set each patient up for success, ensure they have the right expectations for any procedure and that you have documentation should there be any resultant legal issues down the road related to the procedure. This demonstrates that you evaluated all relevant areas of the patient’s anatomy to properly plan for implants or other procedures.

This entry was posted in Dental Imaging, Dental Equipment on November 2021 by Chris Bobby. ← Previous Post Next Post →