This entry was posted on August 2018 by Adam Sweet. 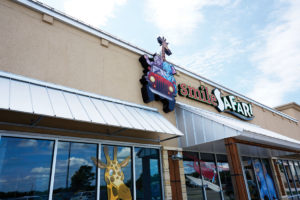 Looking up into a massive, leafy tree, patients at Smile Safari in Derby, Kansas, are greeted with the sights of grinning wild animals peeking at them between the branches. These animals did not accidentally wander in: they were carefully chosen to live inside this vibrant pediatrics office.

Joining an existing office in Wichita, Children’s Dentistry of Wichita, Smile Safari is the second location for Dr. David Brown, and it opened in May 2016. Its over-the-top theme transports children and their families into the Serengeti, with animals greeting them from every corner of this beastly practice. With 12 treatment chairs, Smile Safari has grown quickly to be a favorite among its young patients, the doctor, and his team.

“The decision to expand our practice was easy,” began Dr. Brown, who joined the practice in 2006 and bought it in 2010 from his associate, Dr. Stephen Moore. “We saw a need for dentistry that was not being met south of Wichita. We wanted to be the pediatric office that not only was there to meet the needs of these patients and their parents but also would stand out and make a visit to the dentist fun.” 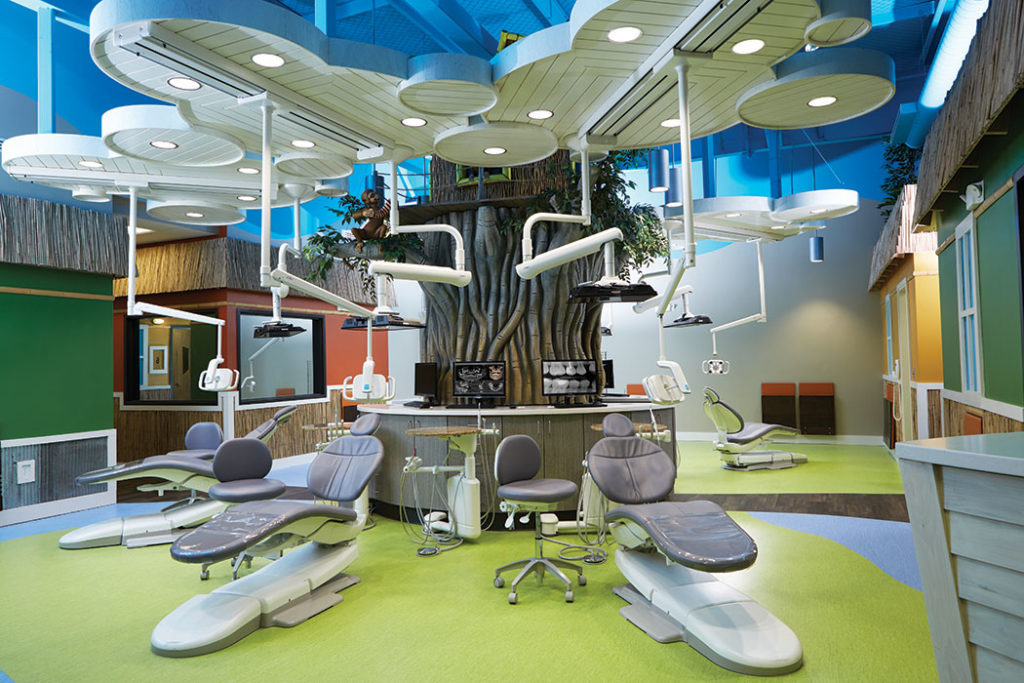 This is no ordinary ceiling! Looking up from the operatory chairs that circle the hygiene bay, children are met with colorful, furry characters causing mischief in a massive tree. 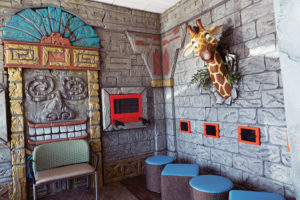 Derby, with a population of approximately 22,000 residents, is a suburb of Wichita and home of McConnell Air Force base, large manufacturers, and well-regarded schools, making it a lively community of growing families. According to Adam Halabi, the Henry Schein Equipment & Technology Specialist who worked on the project, many patients who visited the Wichita location actually traveled from the Derby area, so opening a second office there  made sense.

“Dr. Brown was the first pediatric dentist to open a practice in Derby of this type…modern and a place where children could enjoy their treatment,” noted Mr. Halabi, who has enjoyed a decade-long relationship with the doctor. 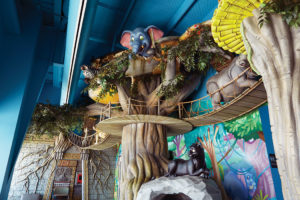 The doctor was already extremely busy with the Wichita location, so he needed to know he could rely on the team he chose to build the Derby office because he could only provide minimal oversight. Mr. Halabi helped the doctor when he relocated the Wichita office to a new location, and Dr. Brown called on him, Field Sales Consultant Paul Mastrobuono, and the rest of the Henry Schein team to, once again, take ownership of a building project.

“Henry Schein was the clear leader in dealing with practices that deal with multiple locations,” Dr. Brown explained. “They presented their portfolio of multi-location offices, both locally and nationally, and I knew they had the experience to help us expand our practice and become successful.”

When Dr. Brown laid out his vision for the office, he wanted it to be both modern and playful for children. “The design of Smile Safari is very fun and unique,” the doctor continued. “We have six treatment rooms, all equipped with doors to help with privacy and sound issues. In our hygiene bay, we have six chairs that surround a large tree. This allows for great patient flow and makes our patients more comfortable.”

Immersed in a jungle of wild animals, children erupt in giggles at the wandering creatures in the reception area. 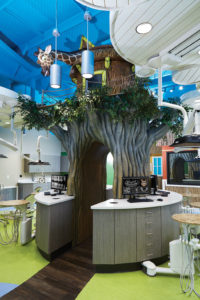 Underneath the "shade" of the leafy rain forest, digital X-rays, captured with Dentsply Sirona Schick sensors and a Orthophos panoramic unit, clearly show diagnoses that mom and dad can see on the monitors for treatment discussion.

The spectacularly designed office is in a 4,100-square-foot space in a new strip mall with easy access for patients and clear sight lines from the road. Next door is an orthodontics practice, making the location a draw for all types of pediatric needs. The design was created primarily by the doctor’s architect, with the help of the Henry Schein Integrated Design Studio team, who collaborated and defined the mechanical details for the engineers.

“Dr. Brown specifically wanted to create a place where kids would not fear the dentist,” said Mr. Halabi. “Several contractors commented that if there had been a place like this when they were a kid, then they would have had a lifetime of dental care.” The waiting area takes visitors to the center of a jungle: at the top of the high ceilings, a detailed and colorful world enchants patients. Above the check-in desk, a monkey dangles precariously from a swinging bridge that connects two tree houses. A friendly zebra, rhino, giraffe, and elephant look down from another peak as a plane flies toward the reception area, and a leopard paces along another bridge that winds overhead. A massive gaming area is set inside a jungle ruin, and one of the huge trees opens to a large doorway that draws patients into the clinical area.

“The theme and safari animals are what make our office stand out,” confirmed Dr. Brown. “You can see the animals from the parking lot, which instills excitement in patients to come to their appointments. Each room features differently designed walls that make it a bright, colorful office.” 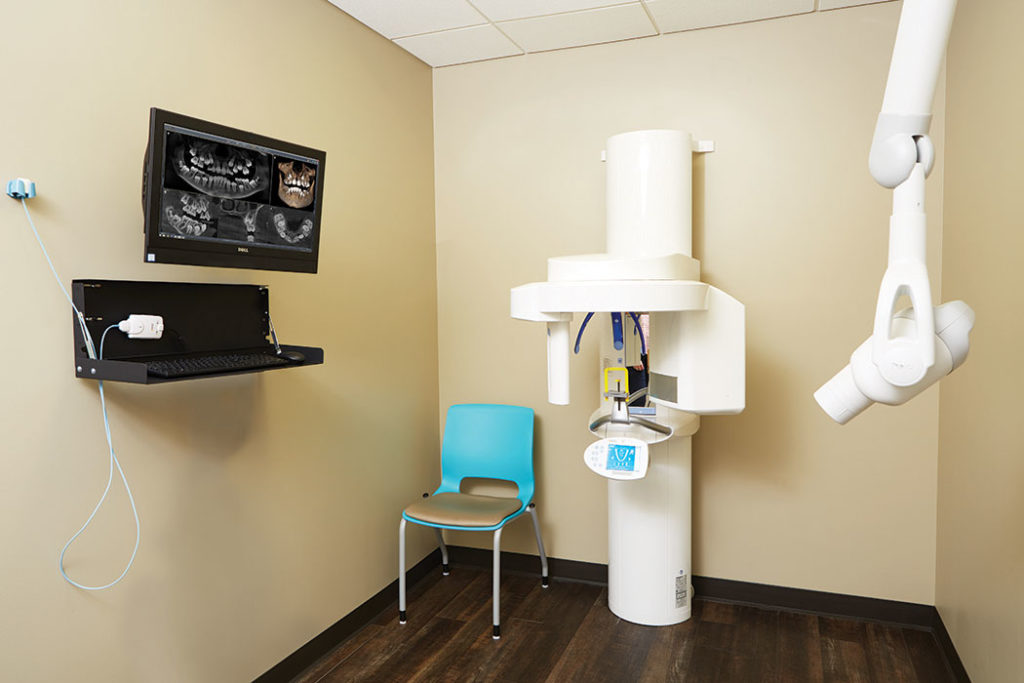 Catering to the unique needs of pediatric patients, the Dentsply Sirona Orthophos panoramic system can be adjusted both vertically and horizontally to ensure the X-rays are focused exactly on the areas to be captured, providing added safety and precision.

The doctor chose A-dec chairs, cabinetry, and lights for his operatories after touring the company’s factory and observing its workmanship firsthand. With rear-delivery, integrated handpieces, and a patient-facing monitor used for entertainment–but more importantly–education, the setup has allowed Dr. Brown and his team to work more productively while also providing the office with the contemporary look and high quality he wanted.

Digital Imaging that Caters to Children 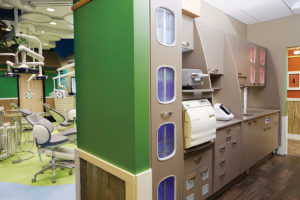 The Pelton & Crane sterilization center is equipped with top-of-the-line equipment, like the Midmark M11 autoclave, in a configuration that streamlines the dirty-to-clean process and places it within a few steps of treatment rooms.

High quality extends to the technology in the office as well. The Dentsply Sirona Orthophos panoramic imaging unit was chosen specifically because Dr. Brown wanted a true pediatric pan, which adjusts the beam both horizontally and vertically for small patients. The Dentsply Sirona Schick 33 sensors provide flexibility with a tiny size 0 sensor that can be used easily with toddlers. The walk-through, galley-style Pelton & Crane sterilization center sits outside the hygiene bay and in the center of the closed operatories; it features top-of-the-line equipment, including a Midmark M11 autoclave.

After serving the Derby community for over a year, the office has experienced rapid growth. “We currently receive more referrals from general dental and pediatrician offices in the area,” said Dr. Brown. “Previously, we were not getting referrals from these offices due to location. Our new office has greatly improved the quality of life for our team, too. All of our chairs, units, and equipment work perfectly; they allow all our staff to be comfortable and concentrate on exceptional dental care.” ♦ 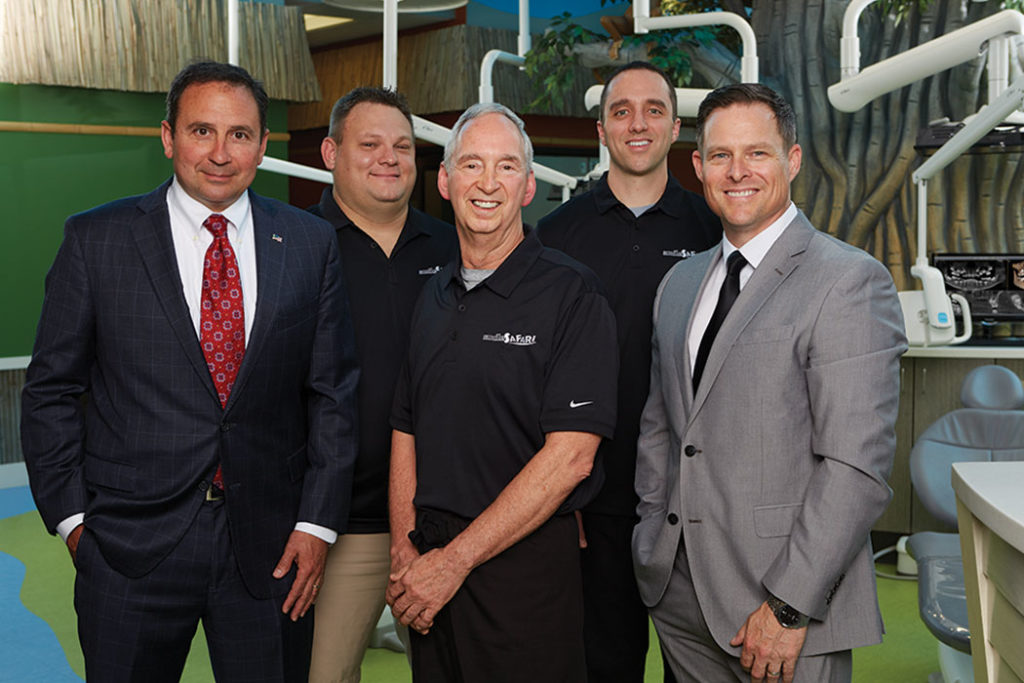 This entry was posted in Dental Office Design and tagged Pedodontics on August 2018 by Adam Sweet. ← Previous Post Next Post →