This entry was posted on September 2020 by Adam Sweet.

Moody Dental has made a number of exciting changes over the past several years to its two general-dentistry offices in Schererville and Cedar Lake, located in northern Indiana. Owner Dr. Moody Wasif has added new equipment and technology to elevate care and to accommodate his growing patient load. He has enjoyed such dramatic growth in just three years that he outgrew his 1,100-square-foot Schererville office with three operatories, and built a new practice that is 6,500 square feet. The new location started with eight operatories and recently completed four more that were set aside for further expansion, after being open for just under a year. Compared to his previous office, Dr. Wasif has quadrupled his capacity.

While the new coronavirus has shaken up dentistry, it’s been a pretty simple adjustment for Dr. Wasif, who had already implemented many of the extra safety measures now recommended by governmental agencies to protect patients into his daily processes.

Dentrix Ascend Was a Game-Changer 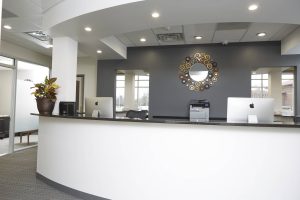 Sleek, and completely paperless, the office runs effectively even with the added constraints of COVID-19 thanks to a thoughtful design and emphasis on digital technology.

This modern-day success story is something Patrick Broderick,
Henry Schein Field Sales Consultant, is happy to be part of. He has known Dr. Wasif for more than seven years, stopping in to see him from time to time. The doctor already used a CEREC system and practiced same-day dentistry, so in 2017, Mr. Broderick invited him to a CEREC event, which he attended. Dr. Wasif purchased a second CEREC system, installing it in his Cedar Lake office, and the relationship between the doctor and
Henry Schein began to deepen. The doctor was pondering his need for a newer, bigger office in Schererville, but it wasn’t until 2018, when he switched his practice management system to Dentrix Ascend from Eaglesoft, that conversations took off more seriously about building a new office.

Mr. Broderick had touted the portability of cloud-based Dentrix
Ascend and the benefits of having just one database shared between the doctor’s multiple locations. The doctor was convinced and made the transition, and it was a natural progression to bring Mr. Broderick into his construction project planning. Shortly after, Equipment Sales Specialist Mike Topf was added to the team, and together, they looked for the best way to deliver on the doctor’s goals. 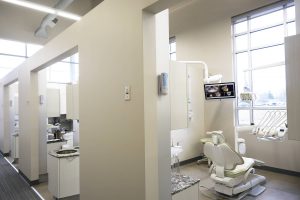 “Having a modern practice eliminates cords and clutter and supplies sitting on side counters in the treatment room. It also allows for easy wiping of the chairs and cabinets and ceramic tile floors,” said Dr. Wasif.

“My goal was to think outside the box and create a relaxing, open atmosphere for patient care where the patient didn’t feel congested with old technology,” said Dr. Wasif. “I designed an office with relaxing colors, lots of room, the newest technology, and large windows with high ceilings. The office design allows for high efficiency and can handle a large volume of dentistry with a large front business office that allows for privacy in patient care.”

His purchase of Dentrix Ascend, originally done to facilitate information flow between his offices, has been another excellent tool during the
COVID-19 pandemic.

“All of our consents are done online using Dentrix Ascend,” said Dr. Wasif, “and payments are taken over the phone before the patients come in to eliminate the touching of things. We are a completely paperless clinic.” 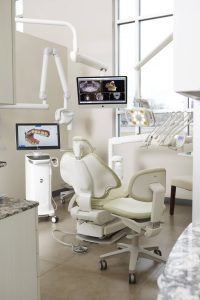 The A-dec chairs and delivery units are comfortable for patients and gorgeous as well, contributing to a exceptional patient experience.

The office immediately impresses a visitor with its modern Craftsman-style exterior, flat sloping roof, large windows, and large, visible signage. Inside, patients are treated to leather furniture in calming tones of charcoal gray. Upscale finishes include lively quartz counters and rich carpeting. The ceilings soar above with exposed ductwork contributing to the contemporary feel of the space. Crisp white walls and cabinetry round out the sophisticated palette.

Inside the operatories that line one side of the hall, cheerfully lit by natural light pouring through an abundance of windows, the doctor moved three rooms of furniture from his previous Schererville office to its newer and bigger replacement. He selected top-of-the-line A-dec 511 chairs and 533 continental delivery units for the remaining treatment rooms. The doctor chose A-dec because of the exceptional quality of its engineering and the company’s willingness to stand behind their products, noted Mr. Topf.

The A-dec integration has given the doctor flexibility to adapt to virus precautions, too. The changes he’s made have been minor and easy to implement.

“Having A-dec electric handpieces vs. air-driven can eliminate aerosol when the air is turned off during surgery and so forth.” Moody Dental has and always will be ahead of the game when it comes to PPE, said the doctor. His staff have always been required to use face shields prior to the pandemic, and there are hand washing stations with aerosol foam sanitizer in every room. He incorporated a few minor modifications to his processes for added coronavirus prevention. He now requires all staff to wear a surgical mask at a minimum, take patient temperatures and use a peroxide rinse. Every patient is provided a mask and hand sanitizer as they walk into the practice. Patients receive prophy paste to polish at home with a toothbrush. 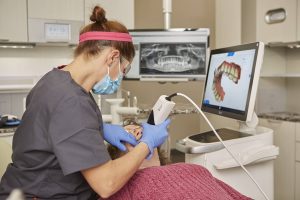 The doctor already used a CEREC system in his practice, but purchased the newest Primescan intraoral scanner, which he feels delivers a superior restoration vs. those that are lab fabricated.

“Having a modern practice also eliminates cords and clutter and supplies sitting on side counters in the treatment room, and it allows for easy wiping of the chairs and cabinets and ceramic tile floors,” the doctor said, emphasizing the ease in which the office design already met stringent disinfecting standards.

A heavy same-day dentistry user, Dr. Wasif used his CEREC system daily in his original office and purchased a second one when he moved. “He uses the CEREC Omnicam full time,” said Mr. Topf, who noted that the doctor also purchased the CEREC Primescan intraoral scanner, Dentsply Sirona’s newest offering, with the second CAD/CAM system.

“With the CEREC Primescan, we are able to do procedures on the spot and with higher quality than a lab-fabricated procedure,” explained Dr. Wasif. “It provides a nicer image for a top-notch dentist. The patient loves that it’s same day; it saves times and stress; and it delivers a less ‘gaggy’ experience.” 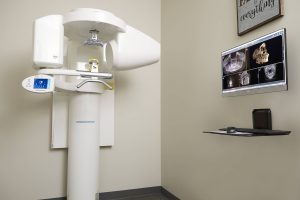 The Galileos 3D cone beam X-ray system integrates perfectly with all of the technology including the CEREC system. The doctor utilizes this precise imaging for implants and surgical cases.

Mr. Broderick recalled that on the day they installed the CEREC Primescan in his new practice, the doctor was so busy, he milled 11 single units that day alone.

“I told him that was how many some practices do in a month!” exclaimed
Mr. Broderick.

Pre-COVID, Mr. Broderick said that Dr. Wasif placed an estimated 60 to 80 same-day crowns. Both CEREC systems get a workout at Moody Dental every day. The practice is in the process of installing an additional Primescan and CEREC Primemill to keep up with the volume. The larger and more modern practice also allowed the doctor to integrate all of his technology together in a cohesive, efficient design to maximize productivity and workflows.

“We picked technology that works well together,” confirmed Dr. Wasif, “including Dentsply Sirona Schick sensors, cameras, and A-dec equipment. And the CEREC systems integrate with the Dentsply Sirona Galileos, our 3D cone-beam unit.” 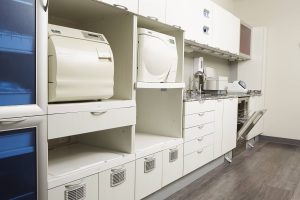 This high-volume practice places 60–80 crowns in a typical month, so having a high-powered sterilization center that can keep pace with room turnover is vital for the doctor.

The doctor uses the 3D X-ray system for implant and surgical cases; the CEREC systems for crowns and bridges; and his intraoral cameras for patient education. Dr. Wasif has earned a stellar reputation for a kind, caring experience that leverages advances in dentistry to make appointments faster and easier. This commitment to offering the very best to patients has also been the catalyst that has allowed Moody Dental to withstand the coronavirus challenges without dramatic changes to the way he does things. The technology he chose, the procedures he already used and his office configuration have positioned him nicely to continue to practice, with procedures already well-ingrained in his practice, while offering the utmost safety, comfort and skill to his patients. The
Henry Schein team had only good things to say about the doctor and the future of his practice.

“He treats people well and wants to work with other people who treat people well,” concluded Mr. Topf.

As dentistry adjusts to a new way of operating, Dr. Wasif’s practice continues on, without missing a beat, because of the thoughtfulness of his office design and his desire to give his best to patients. ♦ 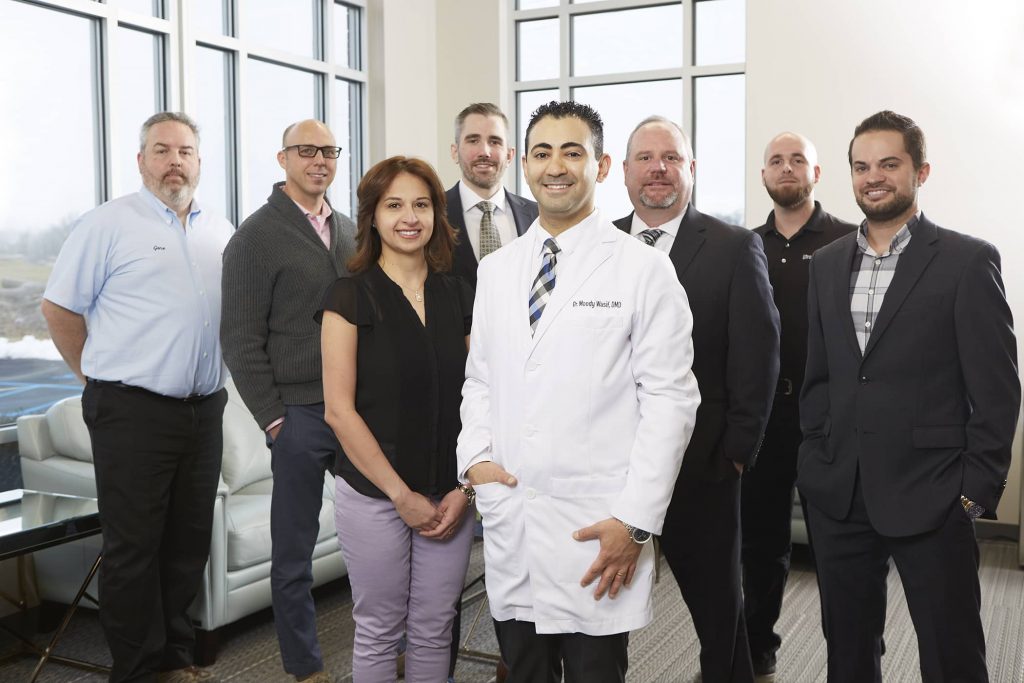 This entry was posted in Dental Office Design and tagged General Dentistry on September 2020 by Adam Sweet. ← Previous Post Next Post →