This entry was posted on May 2019 by Adam Sweet. 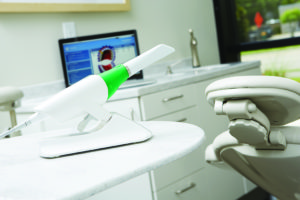 Gagging is not fun. Gagging does not lead to five-star Yelp! reviews. Yet, 75% of dentists subject their patients to gagging on goop because their practices adhere to traditional impressioning procedures.

Resistance to digital impressioning is rooted in valid concerns surrounding accuracy, cost, workflow, and support. And the ultimate concern – how these factors contribute to a dental practice’s bottom line. The common question is “Will I see a return on my investment after purchasing an intraoral scanner?”

Dr. Robert Berg, Dr. John Pasicznyk, and Dr. John Yu were early adopters of digital impressioning. Their experiences with the technology transformed them from intraoral scanner users, to advocates. Each saw digital impressioning contribute to clinical and financial growth; something that analog impressions did not deliver. Their stories show how embracing intraoral scanning can lead to: 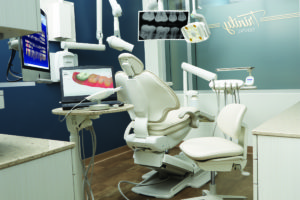 Dr. Pasicznyk likes to compare analog impressions to VHS cassettes: “How many times did you watch a movie and everything was great, but then suddenly, there was a spot that became garbled for 5-10 seconds and then went back to normal?” It’s the same with analog impression techniques, he explains. “That directly translates to the fit of crowns, how easily they go into place, the amount of adjustments needed, and the accuracy of the bite registration. With my digital impressions, there is almost no adjustment needed.”

Dr. Yu agrees, and says when there’s an area on the digital impression that is sub-par, he uses the software to “erase” that portion and quickly rescans it. This becomes especially valuable when he’s working on multiple crowns simultaneously.

“It is increasingly stressful when I am doing more than one tooth to get all the areas accurately,” says Dr. Yu. “This is where I see a huge benefit in digital impressions.”

Before, if there was a void in one area of the impression, he would have to remix the material and put the tray back in the patient’s mouth. Now he just rescans the missing area before sending to the lab or mill. 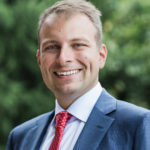 Another way digital impressions lead to superior results, says Dr. Yu, is by eliminating outside factors that can distort a physical impression.

“There are so many things that can happen after the impression is taken. It may be temperature from the sun shining on the impression inside the shipping truck, or how the water and powder is mixed up at the lab.”

According to Dr. Pasicznyk, the last thing that a patient who has been waiting for a permanent crown wants to see is a doctor fighting to get it into their mouth because of a fit that’s slightly off. Thanks to the precision of his digital impressions, he can now place a patient’s crown, with ease, in under 15 minutes.

A traditional impression takes, on average, four minutes from start to finish. The process requires trays, the mixing of material, and time to set in the patient’s mouth. Digital impressions eliminate these steps, and for these doctors, that means major time savings.

In Dr. John Yu’s family practice, SmileMore Dental in Oro Valley, Arizona, he estimates his digital impressing cut his impression time per patient by two-thirds. Both Dr. Robert Berg, a prosthodontist in New York City, and Dr. John Pasicznyk, who owns Northview Dental in Indiana, have shaved three minutes from each impression they take by using a intraoral scanner.

“Three minutes doesn’t seem like a lot, but when you do it five or six times a day, it adds up pretty quickly,” says Dr. Pasicznyk.

For these dentists, digital impressions aren’t a technology that augments traditional impressions, but rather, replaces that workflow completely. Dr. Pasicznyk hasn’t taken a conventional impression for more than five years. Dr. Berg uses his digital scanner every day and has incorporated it into his new patient exams. Dr. Yu takes six-to-eight scans each day, usually as the first step in his same-day dentistry cases. 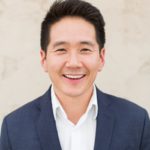 “I only have so much time and digital impressions give me more of it,” says
Dr. Yu, who estimates that his scanner alone has increased his practice production by 10%. “If I can see even one more crown patient because of faster room turnover, it’s worth it.”

Each doctor uses their extra time in different ways. Dr. Yu invests time in continuing education, documenting cases, or taking a coffee break. For Dr. Pasicznyk, taking digital impressions has freed up his schedule to spend more time with patients to talk about additional practice offerings, like whitening, sleep apnea, or aligners.

“It typically takes 10 days to get a crown back [with traditional impressions], but digital impressions have reduced that by two or three days,” says Dr. Yu, who also saves $10 to $15, per case, in shipping costs.

Dr. Pasicznyk was motivated to incorporate digital impressions into his new practice just six months in because as he became busier, the time lag and lab remakes were becoming serious issues for him. 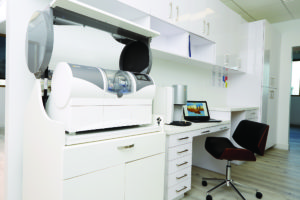 “As we got busier and busier, the inefficiency of taking an impression and sending it to a lab, waiting for a model, stopped making sense,” says
Dr. Pasicznyk.

Both Dr. Yu and Dr. Pasicznyk use their intraoral scanners as part of a full CAD/CAM system to offer same-day dentistry. In addition to restorations, Dr. Yu also uses his scanner for implant dentistry, surgical guides, night guards, dentures, and clear aligners.

Dr. Berg prefers to rely on his trusted lab partner to create his restorations, utilizing his scanner’s “scan and send” functionality.

Dr. Berg incorporates digital impressions into every new patient exam to illustrate his suggested treatment. This visual aid has made it easier for patients to see concerns he identifies. Patients can also better understand how their treatment plan will improve their smile and overall health.

“It has increased patient acceptance 100 percent,” says Dr. Berg, who uses intraoral scans for restorative work, orthodontics, and implant dentistry. “The second my patients see it, they are patients for life.”

Dr. Pasicznyk has also witnessed a dramatic increase in patient acceptance rate among his orthodontic base. He attributes this success to the ability to combine a digital scan with software that simulates final patient outcomes.

Most recently, a digital scan prompted a 65-year-old patient of Dr. Pasicznyk to express interest in starting orthodontic treatment. The patient did not realize how crowded his teeth were until seeing the intraoral scan.

“Patients don’t readily accept treatment if they don’t see the problem,” says
Dr. Berg. “The reality is the digital scanner pays for itself the second you put it in your office because patients talk about it.”

When Dr. Pasicznyk was a student athlete, he had conventional impressions taken to receive a mouth guard. He hated the experience so much that instead of getting a new mouth guard for each season, he used the same one throughout all of high school. That memory stuck with him, especially when thinking about the experiences he creates for his own patients.

Dr. Yu counts digital impressions among his greatest marketing tools. “My patients compare it to their previous dental experiences and recall the horrible moments.” He says their positive response is magnified if the patients experience anxiety or have a high gag reflex. He’s discovered that having it has led to more patient referrals, especially with the use of social media.

Dr. Berg has patients regularly ask about digital impressions and 3D printing. He believes it’s becoming an expectation because “digital everything” is just a part of their lives.

“Patients talk about it [digital impressioning],” he says. “You won’t believe the word of mouth. They are wowed by it.”

Despite the upbeat perspectives these doctors share, Dr. Berg cautions that dentists cannot abandon the fundamentals of good dentistry in lieu of technology.

“Sound principles are still the most important part of dentistry,” says
Dr. Berg. “No amount of digital wizardry will make you a better dentist. Digital impressions are a tool in our armamentarium.”

However, with patients asking for digital impressioning, technology costs dropping, and treatment options expanding, intraoral scanners are more practical, for more practices. It’s estimated that by 2020, 1 in 2 dentists will own a digital scanner.2 With this technology, dental offices have the chance to see higher quality results, increased production, and ultimately, more business.