The Diagnostic Efficacy of Digital Imaging in Dentistry

This entry was posted on August 2009 by Rose Lanaro. 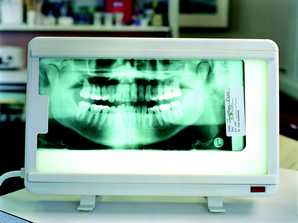 Cintillation crystals, which are essentially thin wafers of silicon, act as an electronic storage media. When exposed to radiation, bonds between silicon atoms are broken, producing electron-hole pairs with the number of these pairs directly proportional to the amount of exposure that an area has received. Using an ADC, Analog to Digital Converter, the computer is able to convert the electrical or analog signal into a digital format, thereby creating an image for display on a computer monitor that is made up of many discrete pixels (picture elements), which are visualized as varying shades of gray. This new and emerging technology was the basis for the creation of the first Charged Couple Device (CCD) sensor to be used for dental diagnostic imaging. Digital intraoral radiography then became a reality with the introduction of the first dental digital imaging systems in the late 1980s and early ’90s. Digital imaging has subsequently transitioned into two basic modes of image capture, the CCD and/or the Complementary Metal Oxide Semiconductor (CMOS) sensor and the Photostimuable Storage Phosphor (PSP) sensor.

While dentistry has been embracing digital imaging for intraoral and extraoral diagnostics, a debate evolved. It centered on the clinical benefits of digital imaging versus film radiography. Some benefits of digital imaging can be very tangibly measured whereas others lend themselves to more subjective analysis. One of the major tangible advantages of the digital technique is the reduction in patient radiation dose as compared to an analog technique. Patients are aware of the need to lower their exposure to radiation. Digital radiography can offer dosage reductions from 60% to 90% as compared to a film technique. In addition, digital sensors have wide latitude in terms of exposure ranges so that even at very low exposures post-processing digital enhancement adjustments to density and contrast can produce a useable diagnostic image. PSP sensors enjoy even larger latitudes as compared to both CCD sensors and film; they have a linear response to the level of five orders of magnitude of X-ray exposure. 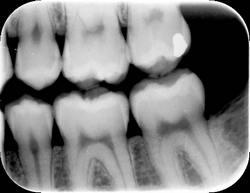 Another very tangible advantage of digital acquisition is the speed with which the image can be displayed and read. Hard-wired CCD or CMOS sensors have an almost instantaneous image display, whereas PSP requires some processing time. Initial PSP processing times vary from approximately 25–30 seconds up to several minutes, hardly an inconvenience when you consider automatic film processing times are from 5 to 6 minutes. The latest evolution in PSP imaging is the Soredex OpTime with readout times ranging from 4.3 to 7.5 seconds. The speed of image display is a significant factor in some disciplines in dentistry, including endodontics and surgical implant placement to name a couple of good examples. The added processing benefit is the elimination of the need for a darkroom and processing chemistry, which greatly increases the efficiency of radiographic imaging 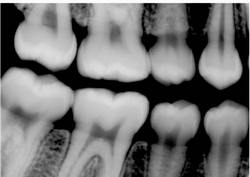 Image quality between digital and film images and between different digital imaging systems are more subjective comparisons. To a certain degree, image quality is in the “eye of the beholder,” i.e., every clinician has a different idea of what meets his or her diagnostic standards. The quality of the image is a function of the physical parameters of the system. Many different factors can influence image quality, including sensor quality, computer hardware, software, monitor characteristics, system resolution, and even external parameters such as lighting, as well as limitations of the human visual system. Spatial resolution is the characteristic of image quality most often described and debated. Spatial resolution is the capacity of the image to display fine detail. Spatial resolution is most often quantified and reported in units of line-pairs per millimeter (lp/mm) with typical radiographic film capable of providing more than 20 lp/mm. Theoretically, when factoring in sensor pixel size, hardware and software enhancements, magnification, display monitor fidelity and luminance, digital systems are capable of spatial resolutions in the range of 25 lp/mm. 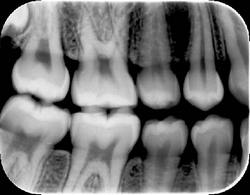 However, the human eye is only capable of distinguishing 32 shades of gray, which corresponds to a spatial frequency ranging from 5 to 7 lp/mm without magnification. The question then becomes, does the magnitude of a digital system spatial resolution above about 10 lp/mm make any diagnostic difference in the clinician’s ability to recognize pathosis radiographically? The answer is still being debated, but at least from our viewpoint, which can be supported from some of our initial investigations into this question, 1,2 probably not. Therefore as an example, can dentists recognize carious lesions confined to enamel as well using digital images as compared to radiographic film? Probably so, but further investigation is needed. An example of an image taken with a Soredex OpTime (spatial resolution of 12.5 lp/mm) is shown in Figure 1. An arrow is pointing to noncavitated proximal carious lesions.

Once a practitioner makes the decision to “go digital” the practice or the clinic must determine which digital imaging system best fits their diagnostic standards.

There are several factors to consider when a digital imaging system is considered. Some of the factors to consider may be the following: 1) Space limitations, 2) Dental information-management system, 3) Computer hardware and software, 4) Computer network capability, and 5) Staff radiographic experience and training. Any or all of these considerations may be valid for the practice or clinic; however, as with most decisions of this type, it usually boils down to a personal choice. The table lists a few of the comparisons between PSP and CCD/CMOS dental intraoralimaging systems.

Finally, overall appearance of the image can be a very subjective assessment. Most dentists prefer image appearance and definition to be as much like conventional film as possible. The bitewing image in Figure 2 was taken with a CCD sensor and the bitewing image in Figure 3 was taken with a Soredex OpTime PSP sensor using a dry skull to maximize the definition of bone. Both images were made using the same kV, mA, and time, using the same enhancement features of the particular post-processing software utilized by the imaging system. From a purely subjective viewpoint, some dentists may prefer one image over the other depending on their personal likes and dislikes.

Medical imaging has been at the forefront of the conversion of analog film-based imaging to digital techniques. Dentistry has lagged behind medicine, but is slowly making progress toward incorporation of digital techniques for diagnostic SOREDEX imaging. The advantages of digital imaging are numerous and it is no longer a matter of if dentistry will convert to digital, but when. Dentists must determine which direction to take when making a decision on a dental imaging system; each basic system has its own advantages and disadvantages. CCD/CMOS and PSP offer similar features, but image acquisition and image processing are different, so the dentist must decide which system will best fit the practice or clinic.