This entry was posted on November 2022 by Chris Bobby.

What’s the most unusual design feature of Mattson Hellickson Dental in Beaverton, Oregon?

Here’s a hint: It isn’t the living room-like waiting area with the gas fireplace, the windowed sterilization room with an open, restaurant kitchen feel, the state-of-the art digital equipment or even the comfy A-Dec® chairs in the operatories.

It’s actually the outdoor firepit, which adds a casual, relaxed vibe to this thriving practice run by former college friends and partners, Samuel Mattson, D.D.S., and Benjamin Hellickson, D.D.S. It’s the first outward sign of their patient-centered philosophy, their attention to detail and their welcoming spirit that informs every aspect of their dental practice. 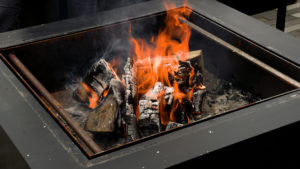 An outdoor firepit: one of the standout features of Mattson Hellickson Dental, located in Beaverton, Oregon.

Having a firepit has been both a conversation starter and an inviting place for patients and staff to hang out during the pandemic — and even a source of new business. Dr. Hellickson recalls a woman who watched their new building go up from the coffee shop across the street. First, she thought it might be a cool new restaurant, and was somewhat disappointed to learn it was a dental office. Until she saw the firepit: “She literally became a new patient because we have the firepit,” he says.

Dr. Mattson and Dr. Hellickson were both 18 when they met at a fraternity rush event at Oregon State. “We met and immediately hit it off,” recalls Dr. Hellickson. “I remember thinking, ‘Well, this guy seems cool.’”

Dr. Mattson remembers their instant connection. “We just had so much in common. We both played sports. We both like to have fun and have very outgoing personalities. So, it was just one of those moments where you meet someone, and you just have this instantaneous friendship.”

Little did they know that their fast friendship would later grow into a long and fruitful business partnership. The friends joined the same fraternity and sweated out Biochemistry 251 class together. The future Dr. Mattson already knew he wanted to become a dentist, just like his father, Dr. James Mattson. Meanwhile, Dr. Hellickson, who was leaning toward some sort of career in health care, got sold on the idea of dentistry after he met the elder Dr. Mattson and spent a summer working as his sterilization assistant. The friends would talk wistfully about working together some day as dentists.

“It's actually come to fruition,” says Dr. Mattson. “Not only did we get to practice together, we got to build our dream practice together. It’s been 24 years now that we’ve known each other. I’m the godfather to his son. We’ve been in each other’s weddings." 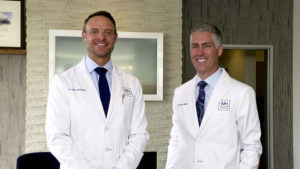 The two friends both attended dental school at the Arthur A. Dugoni School of Dentistry at the University of the Pacific in San Francisco, California — albeit a decade apart. After graduation in 2004, Dr. Mattson joined his father’s dental practice with the intention of learning the ropes so he could eventually take over the practice and enable his father to retire. Dr. Hellickson, who worked in medical equipment sales before going to dental school, graduated in 2014 and joined the two Dr. Mattsons in the practice. The senior Dr. Mattson retired the following year.

Time for a reboot

For a time, the partners continued to work out of the mid-70s era office. But it soon became evident they needed a bigger, more updated facility if they were going to build the 21st century dental practice of their dreams.

“The quality of our dental work wasn't representative of the office that we were in,” says Dr. Mattson.

The roof leaked; the equipment was 30 years old; the sterilization room wasn’t centrally located; and infection control practices had changed considerably over the years. “Early in my career for the first five years or so, nothing seemed dated to me because I'd been going to my father's practice since I was a kid.

“The layout was not conducive to a flowing, well-thought-out group practice,” says Dr. Mattson. “So, Dr. Hellickson and I turned to each other and said, ‘Do we really want to be working here for 20 years?’

“At that point, we decided we could do better,” he continues. “Our staff deserved better. Our patients deserved better. We needed to reboot this place or people were going to start going somewhere else.” 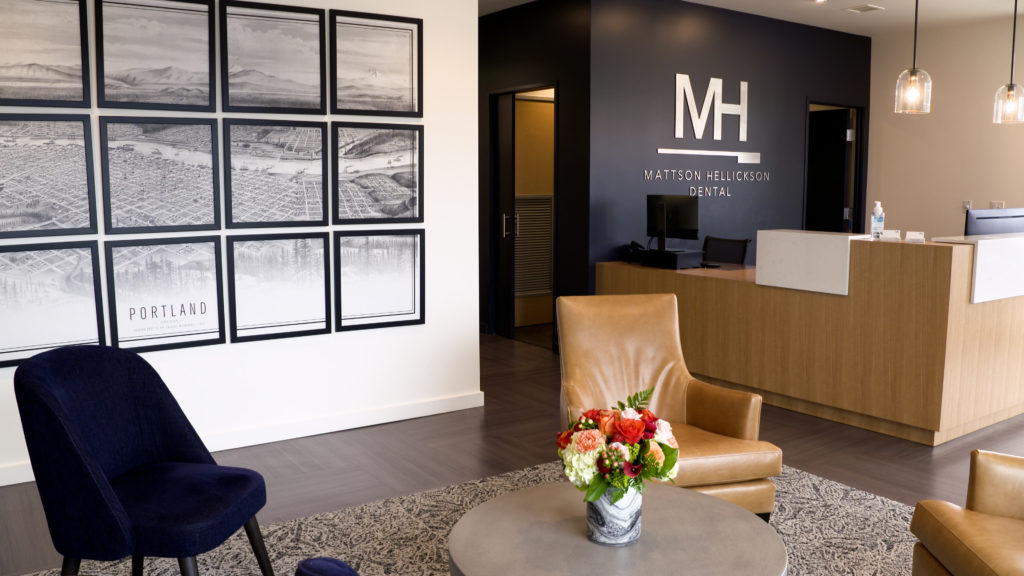 The partners had already begun talking with Ms. Phifer about their renovation plans and the new equipment they needed for their upgrade. They had been working with her for about 20 years, and totally trusted her. “We knew she had our best interests in mind,” says Dr. Hellickson. “I always appreciated her approach of becoming part of the practice and never pressuring us to do anything.”

At Ms. Phifer’s suggestion, they attended a two-day Henry Schein dental office design conference. They met briefly with the dental practice design expert, Mark Tholen, D.D.S., before one of the sessions, and he looked over their plans that had been prepared by a local architect. Right away, he told them the plan was fine, but that they needed a new building.

Once they came to grips with the idea that they couldn’t execute their vision in their old space, they reoriented their efforts. “The driving factor was that we couldn’t build our dream practice in our old building,” says Dr. Hellickson. “The old building was dated and falling apart, and we wanted to be part of the revival of the Beaverton community.”

Dr. Hellickson and Dr. Mattson found a new downtown Beaverton location just down the street from a vibrant neighborhood full of restaurants and bars. They purchased their new building in November 2018, tearing it down to the studs for the remodel.

Working with IDS, the two partners articulated their vision: for the lobby, they wanted a design that felt modern, yet classic at the same time. “We wanted it to look like the nicest living room you've ever walked into. We didn't want it to feel like a dental office,” says Dr. Hellickson.

Dr. Mattson’s father would always say that patients were like family friends. “So, we wanted the lobby to feel like our patients were coming into our home, like they were guests.” Achieving that homey feel involved installing what Dr. Mattson calls “big inspirational things” — a cozy gas fireplace indoors, a glass wall that brings the outdoors inside and yes, the firepit on the patio.

“One of the best compliments we get is that our practice doesn't feel like a dental office. People are sitting in the lobby in those nice, cushy leather chairs or hanging out having a coffee on our patio,” says Dr. Hellickson. It also doesn’t hurt that they have their own parking lot.

It wasn’t just about esthetics, of course. They also wanted the most up-to-date sterilization room, and the best equipment for their staff and their patients. Mr. Teuscher says the design team helped them achieve a floor plan and a layout that “had great flow, had great eye appeal and worked really well with what they wanted." 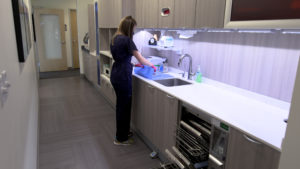 Making the whole process easy and seamless, Mr. Teuscher “really acted as the liaison between the general contractor, the architect and the dental side of things,” says Dr. Mattson. “The architect says, ‘OK, now, how many feet am I going to need between the chair and the wall? And where does the plumbing need to come in?’ And [Mr. Teuscher] says, ‘We need 3 feet here and 2 feet here and we’re going to need to bring the plumbing in here, and the compressor needs to be over here.'"

The partners began their buildout the following April. By November 2019, their practice was up and running in the new locale. “We were just settling into our new digs when the pandemic hit,” says Dr. Hellickson. “We feel fortunate for ourselves and our patients that we were able to have the most state-of-the-art, spacious and safe practice possible during the pandemic.”

After the state-mandated closure for six weeks, when they just saw emergency patients, they were able to reopen and thrive as a practice while keeping their patients safe, he says.

The practice still has 12 operatories, as in the old office, but the layout is much more efficient and comfortable for both staff and patients. Most important, the sterilization room is now centrally located, so the dental assistants no longer have to run back and forth all the time, says Dr. Hellickson.

All of the chairs and cabinetry for the operatories and sterilization room come from Oregon-based A-Dec. “We went with A-Dec everything: the cabinetry, the chairs — their highest model chair,” says Dr. Hellickson. “Patients love that.” 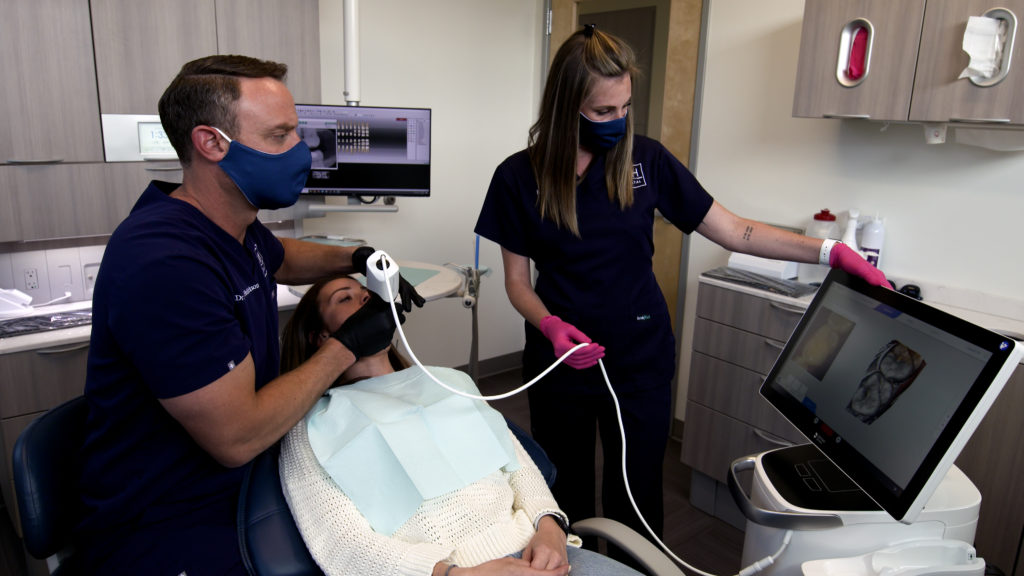 Before the buildout even began, the partners knew they wanted state-of-the art dental equipment. They chose the Dentsply Sirona line, which has been a huge game changer for making same-day crowns and doing implants, they say. “We added the Orthophos S cone beam computed tomography unit, the CEREC Primescan® intraoral scanner, the CEREC Primemill milling unit and the CEREC SpeedFire sintering furnace,” explains Dr. Hellickson. “I call it the Apple of dentistry,” he says. “The actual quality of the dentistry we’re able to do is so much better, because we have so much more information for implants or crowns or denture design.”

The investment in the new office has exceeded the two dentists’ expectations, paying dividends many times over. Since their move, they have been able to increase their production by about 50%. Referrals have increased as well.

“People love coming in,” says Dr. Mattson. “I had one patient say, ‘I'm proud of you guys because not every dentist can do this. You guys are obviously having success. I'm proud to be a patient here.’”