Tales from the Pandemic: A New-Build Dental Practice Takes Hold in Manhattan

This entry was posted on October 2020 by Adam Sweet.

Building out a new dental office at the onset of a global pandemic sounds like a potential for pandemonium. It could have been, but it wasn’t. 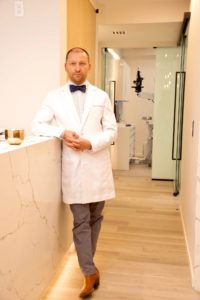 Dr. Leonard Kundel, a holistic dentist from Stamford, Connecticut, formed the right team, after he and his wife and Practice Manager, Lena Podolsky, partnered with Henry Schein.

Dr. Kundel believes that the secret to optimal oral health lies not in the teeth, but in the body, and he takes a holistic slant in treating patients, focusing on growth and development in children and adults. Because of his reputation and unique approach, he sees patients from around the world and many come from New York City. So, Dr. Kundel decided to open a second location in Manhattan, Holistic Dentistry.

Dr. Kundel was in negotiations for a space in Manhattan when he began scoping out ideas for the new equipment and materials in late November 2018 at the Greater New York Dental meeting. At the conference, which showcases dentistry innovations from around the world, he and his wife met Chris Regnier, an Equipment Sales Specialist for Henry Schein Dental.  After getting to know Mr. Regnier and listening to his ideas and advice, they decided that both Mr. Regnier’s and Henry Schein’s industry expertise were a good fit to help them build out the new Manhattan office. 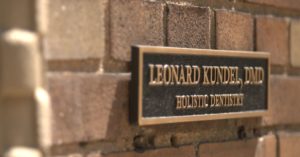 When the doctor spoke to Mr. Regnier about his plans, he listened intently and offered advice. “Chris had technical expertise and was very detailed. He was not selling us but was informing us and letting us make our own decisions,” explained Ms. Podolsky.

Mr. Regnier, Dr. Kundel, and Ms. Podolsky began working together in early December 2018. The doctor told Mr. Regnier how he was planning on treating patients and the types of procedures to be performed. Mr. Regnier and Henry Schein Integrated Design Studio strategically and thoughtfully put together a proposal for a new-build dental practice and planned out the space according to Dr. Kundel’s exact specifications. 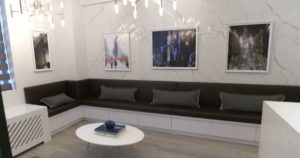 New equipment in his office has increased patient comfort and trust.

“We really needed help in terms of what works and what doesn’t,” said Ms. Podolsky. “Once we had a better understanding of the approach, we felt comfortable moving forward.” Dr. Kundel and Ms. Podolsky finalized the purchase of their new office space, located in a pre-war co-op designed by known architects Groneberg & Leuchtag, in mid-January 2019 and presented their plans to the co-op board four months later.

Hopes of opening in December 2019 faded when co-op board renovation approvals took longer than anticipated. Delays in the procurement of European materials, such as Italian acoustical ceilings and custom lighting, also pushed the completion date further out. While waiting for the board, Mr. Regnier visited Dr. Kundel’s Stamford office to better understand the doctor’s workflow by seeing it in action. He also took measurements of some of the similar equipment and dental furnishings to be used in the new practice, before any purchases were finalized. Mr. Regnier helped Ms. Podolsky button up equipment purchases, while acting as a go-between for her, coordinating and planning with the architects and builders.

By the time February 2020 rolled around, Ms. Podolsky, who was attuned to events overseas, anticipated the worst and wanted to have the office ready for business in a matter of weeks. “Dr. Kundel put everything in Lena’s capable hands,” says Mr. Regnier. While she and Dr. Kundel put in longer hours in Stamford to see patients, anticipating a future shut down, Ms. Podolsky put a line in the sand for a March 1, 2020 deadline. 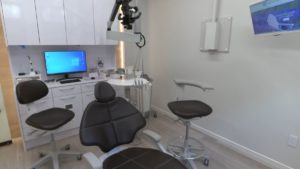 Dr. Kundel has A-dec cabinetry and rear delivery systems, which remain out of the way of patients and staff.

Over the next few weeks, every trade that needed to work on the new office was there working on it. “We had construction workers, painters, and cabinet installers all working at once,” said Mr. Regnier, whose days started at 5:30 a.m. overseeing the contractors to ensure the project went according to plan. He also took the unusual step of getting the equipment installed before construction was complete. “We normally would never do this,” he explained. “But this was an unusual time and we had to make an exception. Lena made a good decision getting this done before official news of a pandemic.”

The office opened on March 1, 2020. Ms. Podolsky and Mr. Regnier worked well into the early hours of the following day. At 8 a.m., they were ready and waiting, along with Dr. Kundel and his assistant Julianna Bila, to greet members of the building’s co-op association and welcome clients.

Holistic Dentistry remained open nearly three weeks before New York’s Governor ordered a statewide lockdown. Dr. Kundel’s offices saw patients 10 – 12 hours, five days a week and every other Saturday, knowing that a shutdown was imminent. Precautions taken were nearly standard procedure due to the nature of the business. “Saliva and blood are byproducts of the work we do,” explained Ms. Podolsky. “We always cleaned and sterilized. We run an ozone purification system every night. We now added UV air purifiers during the daytime for each operatory and waiting area.”

What also changed were the office aesthetics. While the Stamford office has a traditional New England look and feel, the Manhattan office is modern, with a sleek white granite entry way and crisp, clean white interior and black accents throughout the operatories, giving a more modern appearance to reflect its Manhattan patrons.

“We wanted to have the feel of New York and employ the most current technology to enhance our patients’ comfort and care, while maintaining a clean and sterile office,” said Ms. Podolsky. Some of the equipment used at the 79th Street site includes:

When people seek new equipment, high-quality equipment, such as A-dec chairs, they understand that they are in the hands of a professional who wants the best for them. - Dr. Kundel 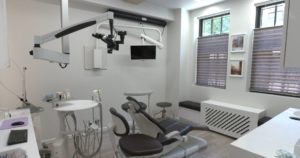 The treatment rooms are outfitted with A-dec chairs and delivery systems.

The Manhattan office reopened—as did all New York businesses—on June 13, 2020. Due to the pandemic, the new waiting room is now used to check in one patient at a time, while others wait outside until called. The staff continues to work 50 – 60-hour weeks to see patients, and are scheduling many more months out at a time. According to Ms. Podolsky, reputation and teamwork are the keys to the office’s seamless success. “It was a fantastic, collaborative effort,” said Ms. Podolsky. “Everyone in the office was involved from Anne Izzy, our patient coordinator, who took care of the front desk in Stamford while I managed the Manhattan project, to Dr. Kundel and Julianna Bila, who worked longer hours to accommodate patients’ needs in the new environment due to COVID.”

“Holistic Dentistry is run by a small team of four on a day-to-day basis,” concluded Ms. Podolsky. “We could not have done it without Chris and Henry Schein as part of our team during this build-out process.”

This entry was posted in Dental Office Design, Sidekick TV on October 2020 by Adam Sweet. ← Previous Post Next Post →