CBCT and its Benefit to Your Practice and Patients

This entry was posted on June 2022 by Chris Bobby. 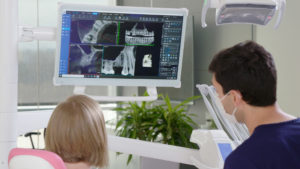 Through the years, there have been countless advances in the field of dentistry. When it comes to technology and what is available to today’s dentist and dental team, those advances have taken mighty leaps.

In this article, we will take a look at cone beam computed tomography (CBCT) and how its introduction into dentistry has given both general dentists, as well as specialists, a new option to better serve their patients and the ability to explain in greater detail any issues that might be occurring in the patient’s head and neck region.

By definition, CBCT is an advanced, highly accurate method of imaging that can provide a three-dimensional volumetric data in axial, sagittal and coronal planes.

“We’ve all heard of the analogy of a tooth to an iceberg where we can only see the top of it,” says Daniel Berant, D.M.D., one of the world’s few dual-trained specialists in the fields of periodontal plastic and implant surgery, as well as orthodontics and dentofacial orthopedics. “What a cone beam CT really does is it allows us not only to be able to see and visualize the root of the teeth, but also to take cross-sections and see the tooth both from a horizontal, vertical and transverse section.”

Simply put, the difference between a 2D periapical radiograph and a CBCT scan is that the CBCT scan allows the dentist and team members to visualize all dentition and supporting hard tissues from any given angle in 3D.

Dr. Berant believes there are three key terms that every dentist and team member should understand when it comes to CBCT use in the practice.

Coronal — The vertical portion of the CBCT scan that includes the patient’s dentition and skeletal structure; what Dr. Berant refers to as a “crown.” This view is often used in conjunction with the scan moving from the nose to the back of the head, or vice versa.

Axial — The portion of the CBCT scan that will take horizontal sections of the patient’s dentition and skeletal structure. Dr. Berant uses the visual of an axe cutting into a tree to explain this view.

Sagittal — The portion of the CBCT scan that slices the patient’s dentition and skeletal structure into left and right halves. Dr. Berant believes this is the best view to use as a basis if you are discussing vertical bone loss with the patient.

Why is CBCT important for a dental practice?

Dr. Berant has a simple message when he speaks to audiences around the world: “What we cannot see, we cannot diagnose.” He also believes that, in some cases, CBCT has become the standard of care in dentistry.

“In terms of standard of care for the regular patient, I don’t think we’ve reached that level quite yet.”

That level, however, Dr. Berant believes is coming. He also believes that for the general practitioner working with specialists, CBCT imaging can be an important bridge between the two professionals, as well as with patients.

“CBCT allows me to diagnose properly,” he says. “It allows me to see things that I could otherwise not see. Also, most importantly, CBCT allows me to communicate not only with the referring dentist or other specialists, but also with my patients. It’s a lot easier telling Mrs. Jones about the lack of bone or the inclination of her teeth while we look at a scan together.

“Finally, it allows me to perform at my peak. Using CBCT allows me to be prepared before I go into treatment and also render treatment with the highest possible precision.”

According to an article published in the Journal of International Oral Health, the radiation exposure dose from CBCT is 10 times less than from conventional computed tomography (CT) scans during maxillofacial exposure. Dr. Berant believes that determining the right time to use CBCT is an important part of any conversation within the dental practice.

“We have to radiate responsibly,” Dr. Berant says. “We need to have careful consideration of the who, the when and, most importantly, the why. Always be asking yourself, ‘if this were me, if this were my child, if this were my parent, would you want to be exposed to the radiation because of the information that you’re able to get?”

Dr. Berant strongly recommends discussing any radiation concerns or questions with your sales representatives from Henry Schein and/or the CBCT equipment manufacturer that you have chosen for your practice. He also recommends always following the “as low as reasonably achievable” (ALARA) principle, as well as the “as low as diagnostically acceptable” (ALADA) principle that has been introduced by the American Academy of Maxillofacial Radiologists.

Since dentists and dental team members work every day in a three-dimensional environment, it makes sense that having three-dimensional technology such as CBCT in the practice could provide a substantial benefit for any treatment plan. Additionally, having the ability to gather the most information about any potential issues in the head and neck regions can help the patient gain a better understanding about the treatment, and also lead to a greater success rate for that treatment, particularly with procedures involving implants or endodontics.

“The beautiful thing about CBCT is the spectrum of use all the way from the diagnosis to the treatment,” Dr. Berant says.

This entry was posted in Dental Imaging, Dental Equipment on June 2022 by Chris Bobby. ← Previous Post Next Post →