This entry was posted on August 2021 by Chris Bobby.

One major advancement in dentistry has been the development of lasers, specifically the Solea® all-tissue laser. This CO2 laser emits a unique 9.3 µm wavelength, allowing it to vaporize enamel and soft tissue.  Solea’s unique technology enables virtually every cavity prep to be performed anesthesia-free and without the noise of the drill, thus reducing patient anxiety. Dentists using Solea have experienced increased new patient flow, workflow efficiencies, and are able to perform procedures that previously were referred out. The result is often increased revenue for dental practices and less stress and anxiety for staff and patients. 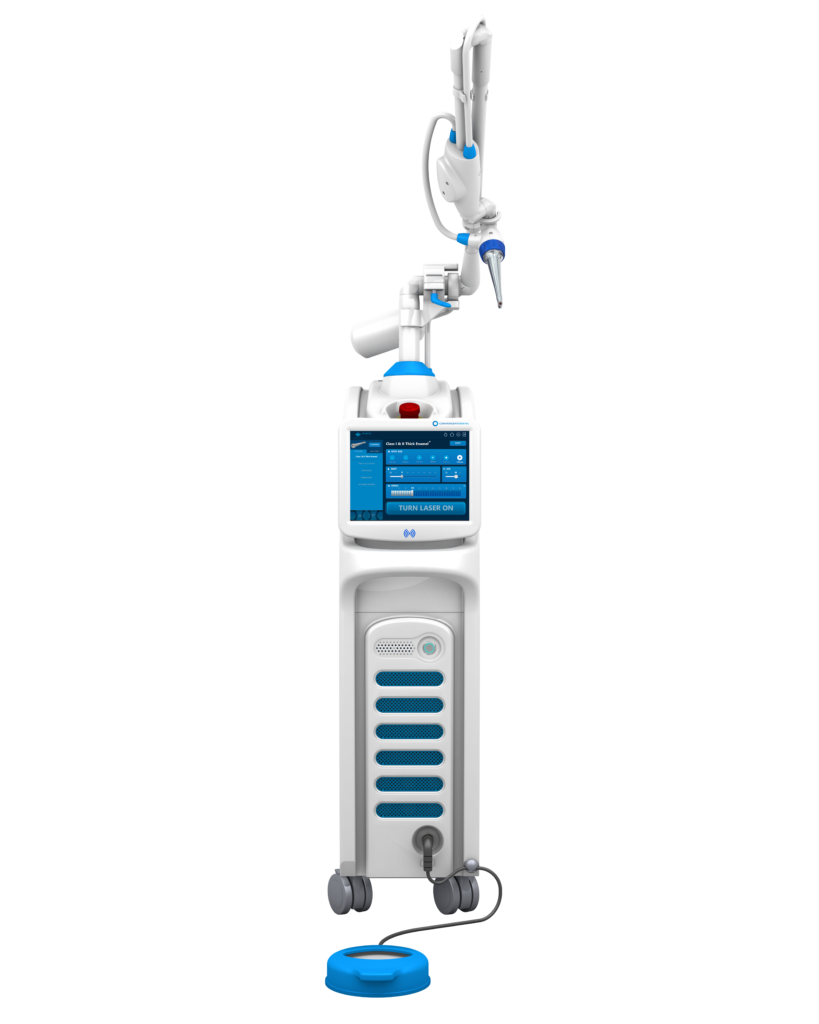 Patients today prefer to receive all of their treatments in one dental practice. Investments in technology such as digital impressioning, CAD/CAM, CBCT, and all-tissue laser are able to offer this convenience and benefit to patients. It also improves productivity, since there are far fewer instances where the dentist needs to sooth patients, inject anesthesia, and wait for it to take effect. The practice can also take on higher revenue procedures, such as gingivectomies, frenectomies, and flapless crown lengthening that previously would have been referred out.

For hard tissue, Solea allows for selective tissue ablation, which results in the preservation of healthy tooth structure and minimized risk of iatrogenic damage. Solea also provides a bactericidal effect because laser energy kills all bacteria with which it comes in contact.

For soft and osseous tissue, Solea enables precise control and is both atraumatic and virtually blood free. Practitioners can easily trough around crown margins to improve the quality of impressions or scans, as well as quickly and bloodlessly uncover an implant.

Solea can be used for hard tissue procedures, including:

It is also ideal for more than 50 different soft and osseous tissue procedures, such as:

Typically, there is very minimal bleeding involved and many procedures can be performed without sutures. The speed of the laser and the amount of water is controlled with the foot pedal. This process works well for children, reducing prep time and eliminating needles that can be anxiety-inducing for young patients and their parents.

The Solea laser offers distinct advantages, particularly during the pandemic. The efficiency of the laser allows dentists to perform many procedures much faster so they’re doing more and seeing fewer patients. Notably, the laser also produces less aerosols, so it’s safer for patients and staff alike. It’s also very convenient for staff because there’s less cleanup and disinfection and fewer instruments needed. 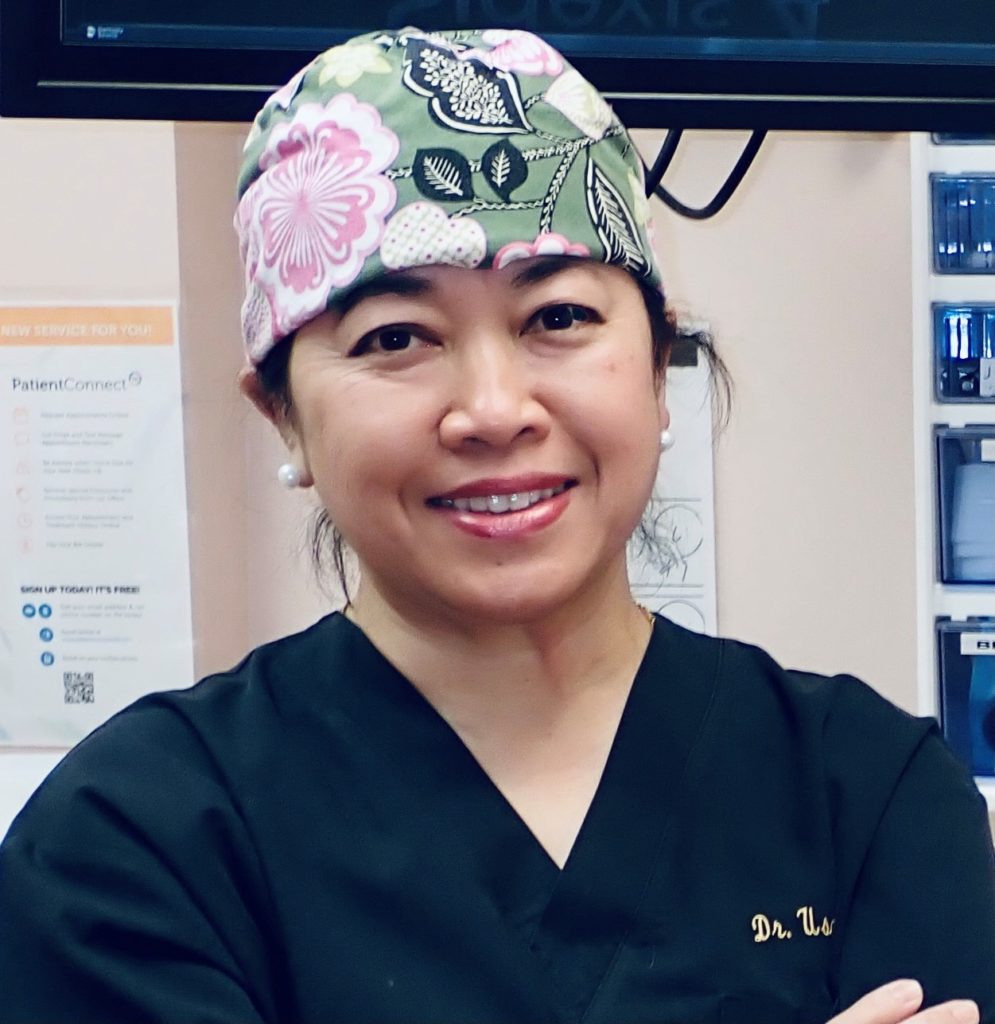 The Solea laser is the tool of choice for a wide array of procedures, including the following cases.

A 40-year-old patient went to another practice for fillings. He was given an injection and his blood pressure dropped and he fainted. After that, he was afraid of injections. Having the Solea in our practice allowed us to reassure him that we could take care of his class II fillings, without having to use anesthesia.

In this case, I used the Solea to perform the pre, remove the amalgam, trough around the amalgam, and then use the chisel to break the amalgam. I then performed the gingivectomy to reduce hypo plastic tissue, removed the old composite with the laser, and finished the restoration.

One patient came in after he had radiation therapy on his throat. Like many patients who had undergone radiation, the quality of his enamel was not good. We performed restorations in two sections, starting with the lower ones first and finishing with the upper arch. I was able to use the laser to finish the restorations, performing eight fillings in just a half an hour.

An elderly patient was having dental pain in tooth #4. She had seen an endodontist and when he put on the clamp to finish the root canal, the tooth broke off. It was during the COVID-19 lockdown, so it was months before the patient came to see me. She knew the best option was extraction, but she didn’t want to have to come back into the office for an extraction and implants during the pandemic, so she wanted to see if we could save the tooth, at least for a year or so.

I wasn’t able to do post buildup, but I looked at the x-ray and saw that I could still do soft tissue crown lengthening. I used Solea to clean up the tissue. In this case, I did need to use anesthesia because I was performing heavy-duty tissue reduction. The patient was on a blood thinner, so there was some bleeding. I put the post in, did the build up, and she was happy. At some point, she will need extraction and an implant, but right now she is happy that I was able to save the tooth and save her from coming back during the pandemic.

A patient had a problem with tooth #28 that I normally would have removed, but he was the caregiver for his wife and due to the pandemic, he would have to be quarantined for 14 days and away from her during that time if he got an extraction during COVID times.

To avoid this situation, we performed crown lengthening, did a root canal, prepped the two teeth, and created CEREC crowns. Down the road, he may need implants but this was a creative way to help him during this time.

A patient had a fracture on the mesial lingual cusp on tooth # 18. I was able to use Solea laser

composite. I was able to prep the tooth and scan for CEREC and put in the E-Max crown for this

patient. I did an infiltration with Septocaine on the vestibule at the mucogingival junction, and

was able to prep for the crown. The patient left happy, because he didn't have to come back

for a second appointment.

A patient with a fractured #19 tooth has hyperacusis and cannot tolerate sounds and vibration. Typically when he comes in for a procedure, I need to give him Valium. He also gets very nervous when I use the handpiece. Recently, he broke a tooth and I was able to treat him and did a crown on #30 and #31 using the Solea laser. Because of that experience, he was ready to do the crown. I used the laser to remove the amalgam, reduce the vibration, and after removing it, I cleaned up the prep underneath with the Solea and the handpiece minimally, and finished with a CEREC crown. This made it easier for him to get a dental procedure without fear. He commented that listening to the work was meditative. 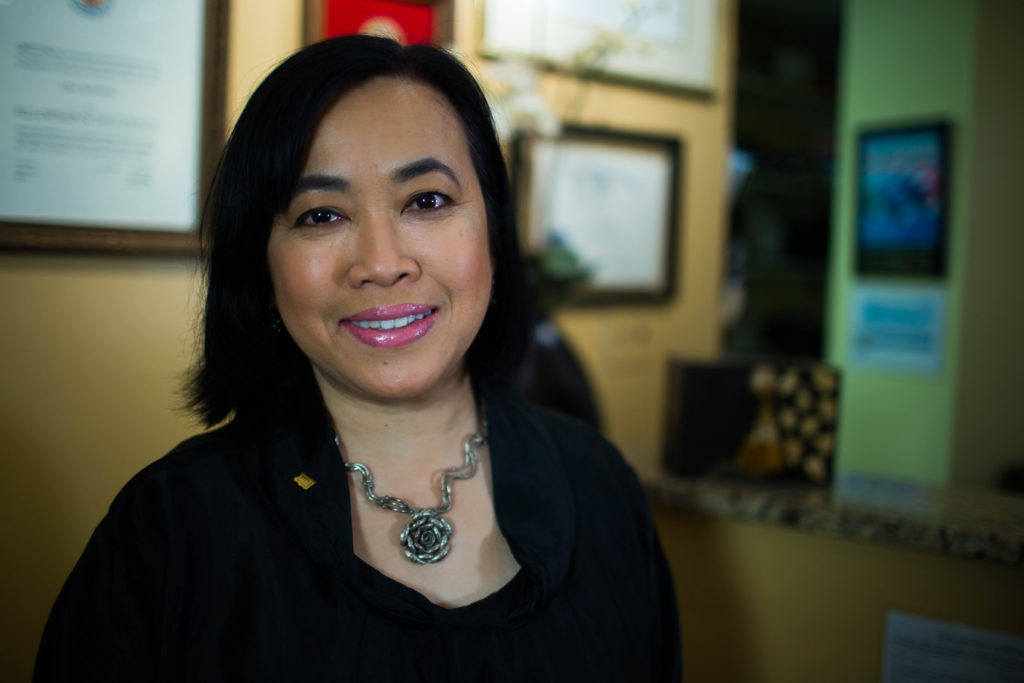 Solea also created the Ultraguide. This handpiece can be used for perio pocket reduction and disinfection for perio patients. It is also a useful tool for flapless surgery for crown lengthening. Another up-and-coming area is Solea Sleep, which provides relief from snoring. This device allows practitioners to tighten the soft palate to reduce the vibrations that cause a patient to snore. This non-surgical intervention is done by simply moving low-level laser light along the patient’s arch.

During the pandemic, dentists have needed to be more creative in finding ways to come back to work and help patients. Investing in the right technological tools can help to give patients convenience and solutions that work for them. The Solea laser means no waiting, no numbness, while promoting faster healing and

This entry was posted in Dental Education, Treatment Room on August 2021 by Chris Bobby. ← Previous Post Next Post →