This entry was posted on March 2019 by Adam Sweet.

Traditionally dominated by 2D digital pans and cephs, orthodontists have gradually been migrating their imaging technology to 3D cone beams.

Dr. James Paschal is an orthodontist who upgraded his digital panoramic and ceph unit to a cone beam unit four years ago and just recently purchased a second cone beam unit for his satellite office. His 3D imaging technology now gives him “10,000 times” more information at virtually the same radiation levels as a digital pan.

“It was always my goal to have a 3D view of my patients,” said Dr. Paschal, “but I waited until my practice matured and the price point made sense.”

The images produced from 3D imaging technology allow doctors to see more of the patient’s anatomy before executing treatment on orthodontic cases.

“We have a lot of issues in orthodontics,” explained Dr. Paschal when detailing the reasons 3D images were important to his practice. “It helps with canine or any impacted tooth. I can see how teeth are erupting and if they are located at unexpected angles. The digital pan never did that.” 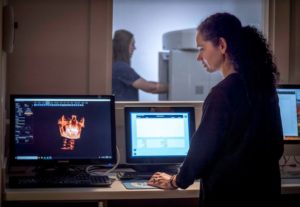 Another situation, says Dr. Paschal, is determining whether roots are overlapping.

“A lot of roots looked like they were overlapping, but after we took a 3D image, we found they were not overlapped at all.  If we are not concerned about hitting the root, we can use mechanics that are more aggressive.”

In addition to the robust amount of information that fine-tunes his treatment planning, Dr. Paschal believes his patients are more motivated to accept treatment recommendations because they can see the 3D images that showcase the concerns.

Dr. Paschal said when parents see the technology and the confidence the doctor has in the diagnosis and treatment plan as a result of the information it provides, “it’s definitely a different conversation.”

“It’s a huge wow factor,” said Dr. Paschal, who estimates that the cone beam has increased his conversion rate by 8% a year.

He has greater confidence in his treatment plans because he knows, in detail, how everything is situated in the mouth, thanks to the wealth of data from the cone beam.

Dr. Paschal admits that the cone beam’s positive impact on his treatment planning was greater than he expected, and he can now enter the appointment already 99% certain of his recommendations after studying the 3D scan.

“I have a confidence I’ve never enjoyed before,” said Dr. Paschal. “You don’t know what you don’t know. Now I expose a lot more teeth because I know exactly where they are. I previously referred two or three patients a month to an oral surgeon but now it’s maybe two a year.”

A study in the Turkish Journal of Orthodontics in 2018 confirmed when 3D data was consulted in orthodontic cases, approximately 25% of the plans originally made from traditional X-rays data, were altered (Coşkun & Kaya 2018).

Applying forces to move teeth can be challenging and the cone beam takes into account other related anatomy that can affect how those forces are applied and the impact it has on other areas, such as the temporomandibular joint (TMJ) or how a patient’s facial view may be affected by orthodontics.

There’s always concern over the use of radiation in dentistry, and that’s evident in the adoption of 3D imaging as well, particularly since so many orthodontics patients are children and teens. It’s imperative for doctors to be thoughtful about the cases where cone beam imaging benefits outweigh the cautions. With different, fields of view, however, a cone beam image can be a multi-purpose window into the patient’s entire facial anatomy, serving as a replacement to other 2D radiographs and ceph images.

Dr. Paschal admits that adding a cone beam to a practice requires additional foresight to be sure the infrastructure can support its operations. With powerful software on board, a practice must have up-to-date, robust computers. There are software subscriptions and upgrades to maintain. There’s also an investment in training so the cone beam can be used to its maximum production. He recommends doctors attend one of the educational courses offered by the manufacturers.

“I personally question why anyone is resisting cone beam technology,” said Dr. Paschal, who financed his first cone beam unit but recently wrote a check outright for the second one he just bought. “Technology is a big part of what we do, and it’s all about quality of care.”

In the end, a cone beam unit can be an important tool to deliver more aesthetic and stable adjustments, alert doctors to potential challenges so they can be addressed ahead of time in treatment planning and increase a doctor’s confidence in his or her treatment recommendations and ability to handle more complex cases.

Contact a Henry Schein Representative to learn more about 3D solutions for Orthodontists.